I was chill’n at one of my favorite places tucked away in Port Salerno, FL called the Grove Dock Bar & Cafe.  In fact, this exact longitude and latitude was the inspiration for the sequel to my upcoming sci-fi (Silversides) and where Chapter one starts in the year 2026.  This place is a BYOF (bring your own Food)… You provide the food, they provide the drinks.  Kind of tells ya how local and tucked away it is.

A place where the view and ambiance normalizes the playing field for people of all social and economic circles– where at the end of the day we’re just people of the same planet all enjoying the same thing… a great conversation surrounded by simplest of things. 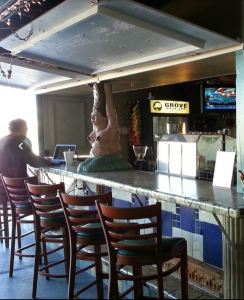 I had brought an artist friend here for the first time last year and he fell in love with it, although, he sat down right in front of the mermaid holding up the roof and when he looked up he laughed, then said, “Kind of intimidating.”  He was 80 at the time but still managed to jump over the door into my ’62 Austin Healey Sprite when I picked him up. He scared the shit out of me, “Guy! Whoa… what are you doing?  I can’t even do that.”

“I always wanted to do that,” he smiled.  “Promise we can come back.”    When this el Niño takes a break and it warms up in southern FL, I will fulfill that promise to Guy.

So what inspires me for a story line?  I suppose the simplest of things.  For Silversides, it was this bar.  I came home one day and pounded out a complete chapter of what I thought it would be like here in 2026 with not a clue of what would follow. Five hundred pages later and 20 light years away, the first draft is done and editing is moving along nicely.  For November Seed, it was a common reed called Phragmites that launches all their seeds during the first cold snap in November. A private holiday for me.  Writing From Europa With Love, the inspiration was from a stunning image I saw on the internet of Jupiter’s moon Europa and a contest dare to write about it.  Inspiration comes from anywhere and everywhere, you just need to look deep enough for it and not skim the surface.  When I hear writers say, ‘don’t know what to write about’, that drives me crazy.  I have five novels started with five more ideas waiting after that.

Here is a perfect example of something anyone can write about.  Watch this fantastic mini-documentary and learn what inspired the creator.  Then transport yourself to some remote outpost on a dust-blown rock of a moon where intra-stellar wars were fought and the moon was declared too dangerous for humans to colonize because of undocumented arsenals left behind.   And your protagonist finds herself here, clearing a plot for she and her fusion powered robotic dog to spend the only remaining time she has left.  In a place no one will come looking for her, and if they do, only she knows where all the nasty stuff lies. 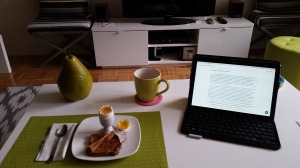 Lately, I’ve been getting a lot of questions from people, who do not know what G+ is about, asking me, “So what’s the difference between G+ and say Facebook or Twitter?”
I tell them, “Well, on G+ I would post this image and my caption would say something like, ‘What better way to start a full day of editing than to have a little protein for my mind in the form of a soft-boiled egg, a little toast for the carbs to keep my fingers on the keyboard and a little coffee for the caffeine to kickstart the process.’  and then I would end my post with a curiosity to the field, “What rituals do my fellow writers have?”
After that, I pause and let that sink in…
“Yeah, but you haven’t told me what the difference is?” they ask.
“Oh… yeah… On Facebook or Twitter, I would most likely split this up into two posts.
The First caption would say, 9:00 AM.  Cook egg.
The second post would then say, 9:03 AM.  Eat egg.”
…  Sarcasm aside, I feel the main difference is that G+ is a two-way conduit, whereas the other sites are social billboards for you to drive by, read, and choose to hit a Like button or not. This is not to say other sites are inferior to G+, it’s just that they serve a different purpose and I rely on all of them for what they are.
All that said, what rituals do my fellow writers take up to start their marathon writing/editing sessions”

“The Lowline is a plan to use innovative solar technology to illuminate an historic trolley terminal on the Lower East Side of New York City. Our vision is a stunning underground park, providing a beautiful respite and a cultural attraction in one of the world’s most dense, exciting urban environments.” – Lowline project
How fitting a name in answer to the already popular High Line of NYC.

I have been an early supporter of the Lowline and finally donning my Kickstarter Tee shirt, I had the opportunity to visit the Lowline Lab down on Delancey & Essex.  As I emerged from subway and walked the streets of this lower east side, it was not hard to imagine what the city must have been like years ago in this lost quadrant of time, with its polished grit and scattered markets of low rise buildings.   I must admit, as a NY’er, we tend not to travel much from quadrant to quadrant–my own being Hell’s Kitchen.  In a peculiar way, NY’ers mimic so many of the dystopian sci-fi societies we read about, siloed into self-contained communities reminiscent of Hugh Howey’s Wool series.

If you are not careful, you will breeze by the lab’s opening with its undressed foyer of concrete floors, black curtains and little else.  I was greeted by a smiling volunteer handing out cookies and eagerly willing to answer questions about this fantastic project.   There is a collection jar for donations, cool Lowiine stickers for my already crowed MacBook cover and pamphlets of the project.   Then it was time to follow the exhibit where you step behind a curtain and read a few stationary billboards about the history of the site, the project, designers… and yes… contributors 😉

The technology is fantastically simple yet highly complex and elegant.  It concentrates the light from above and shoots it down tubes where reflectors receive and disperse the light onto ceiling tiles that seem to be as organic as the plants they feed. 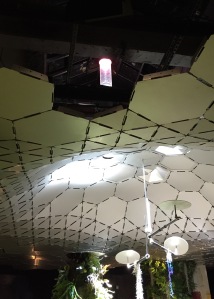 Don’t try to look into the light source from above–it is blinding and more powerful than any spotlight I have ever seen; so bright it seems powered in this dark space.  Click on the image to the right for a better look as it enters from the ceiling. I was amazed at how much light showered onto the lab exhibit from one source.

This technology should be used in every building in NYC.  For about the first ten minutes, I observed the technology.  It was as beautiful as it was technical, making sure to diffuse the light evenly yet spot certain areas to accent and showcase the living lab, making it easy to forget that these plants have not seen the outside in almost a year.

For about the next half hour, I enjoyed the exhibit, studying the plant varietals and the design of cascading layers of plywood adorned with mosses, bromeliads, Rattlesnake plants, stick plants, etc.   During the second round of the

Kickstarter campaign, my contribution awarded me the opportunity to pick a plant

(Rattlesnake plant) and give it a name–which I chose Nori, after my protagonist in an upcoming sci-fi novel called Silversides.  Eventually, I will get to pick where in the lab and where in the finished Lowline underground park, Nori will take up permanent residence.  I found this a 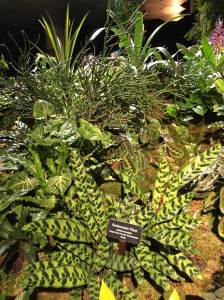 bit ironic because my protagonist, Nori, was named after a seaweed and for my love of Phycology–study of seaweed– as a former marine biologist.  However, the snakeplant was so beautiful and does reflect a slight attribute of my protagonist.  I am looking forward to one day seeing Nori in the Lowline Park of NYC.
It was easy to get lost in thought and during my visit, something very profound hit me.  As a writer of hard sci-fi, what better a place to study the technology of living under artificial means?  I thought back to all the novels I have read, where societies lived under ground or were tucked away in star ships for generations in space, but very few of those stories ever really brought out the true mechanics of living away from natural light.  Sure, the locals are described beautifully but most of the feeling I got as a reader was the longing for being back in natural light.
Standing in the Lowline Lab provided me with a real-life experience I would not have received otherwise.   I stood there with my arm outstretched into the splash of light, it was cooler than I thought it would have been and the earthiness of the air around me was absent.  Yet when I looked up into the main source of light coming through the ceiling, it was blinding and the thought of reaching into that beam projected images of my hand being vaporized.  That’s when I felt the tap on my shoulder, “It’s time to leave,” she said.  “Come on… let’s go outside…”
I am going to suggest to the Lowline they set up some WiFi, power strips and writing nooks for writers in the Lab/Park.  I will see if there is any equipment I can donate from a few companies I know.  This is and will be a working lab for not only the project of the Lowline, but for any hard sci-fi writer.  Try and get to the Lab before March and Don’t miss this opportunity to get involved in this project–it is truly fantastic.
Click here to donate.  It is free to enter the exhibit and well worth the trip.  While down in this area, visit the Essex Market for some fantastic eats.