One of the best ways to measure your writing skill is to hear your own work read out loud.  Unfortunately, when we, as the writer, attempt to do this our writing sounds terrific—we’re bias.  You really need a third party and I found one—Amy. (http://www.ivona.com/)

I live in New York City and on my way to work one morning, I assisted a blind man onto the M79, which is a cross-town bus.  I sat next to him and asked where he was heading and offered my assistance.  He was on his way to the Apple Store on 5th Ave.  As a technologist, that got my attention.  I asked why?  It turned out he was having problems with his iPad and wanted to get there early before the crowds—this was around 6:20 AM, and now, he had my full attention.  I asked him what problems he was experiencing, what he uses his iPad for and how.  He told me the iPad has some great text-to-speech technology, but it was not working correctly.

A technology I thought would be cumbersome for someone blind was everything but that. He was quite tech savvy and the iPad was a window to the world, just like it was for myself.  After spending the morning with this gentleman,  I now think we, the seeing-prepared, are held to a disadvantage.   He was making full use of the inherent features of the iPad, much more so than myself, and here I was, a technologist. His iPad would announced what keys he was touching, alert him of incoming messages and read aloud his email, texting and web page content after a search. His eBooks were read aloud and the navigation of the streets in NY directed him to his destinations (You have arrived at your destination). He could hear documents sent to him as well as transcribe documents he sent. He used the on-board microphone and voice commands to navigate around the web. I accompanied him to the Apple Store that morning.  I needed to find out more about the technology.  During my ride with him, I am not sure which impressed me more: the technology or his ability to make it through the grid of NYC on his own.  It’s a challenge, for anyone.

How ironic.  It was a blind man who opened my eyes that morning.  When I returned home that evening, I explored the technology of my Samsung Galaxy Pro 10.1 tablet as well as my S3 smartphone.  I forced myself to use the voice-commands to launch applications, set tickler reminders, navigate web sites and use the voice-to-text for crafting emails, text messages.   Since that time, I have upgraded both my phone and tablet to the Galaxy S5 and Galaxy Pro Tablet 12.2 (respectively).  I use GoogleNow (creepy good). After that day, I realized that having sight makes one blind to some of this technology.  Our eyes have actually dumbed us down a bit.

Now familiar with a lot of the text-to-voice and voice-to-text capabilities, I was still missing was a true text-to-speech engine (outside of Google’s built-in voice navigation). Searching the web and Google Play for other people’s experiences, I settled on Ivona for my text-to-speech engine.  This is not to say that Ivona is the best engine out there, but it is free, so that’s a good start.  With Ivona, you need to add in a persona—the voice interface.  I chose “Amy.  Her sultry, sophisticated British accent is perfect since the protagonist in the Sci-Fi I am working on (Silversides) is female.

Unfortunately, Ivona does not allow one to open a document within its application directly, at least in the free application.  The only way is to cut and paste the text from my document into the Ivona applet.  That works great, but you can get lost quickly cutting and pasting text back and forth between your document and the Ivona applet. In addition, the Ivona applet does not like more than about two paragraphs at a time or it will overload the capability and do nothing.

NOTE:  There is one drawback and that is Moon + reader Pro will not recognize .doc or .docx (WORD) format.  You first need to save your document into at least PDF format for Moon + reader to open into its built-in reader. This is easily accomplished with DropBox’s or Google Docs to convert doc or docx formatted files on the fly. You can open a .doc or .docx file through Moon + reader, but it will launch your default .docx application (in my case, Documents2Go), rendering the text-2-voice aspect out of the picture.

So I now use a combination of both practices.  When editing, I will cut and paste a paragraph from my Document2Go or Google Drive doc file directly into Ivona and play it back.  This allows me to edit until I perfect the read—then I paste it back into my Documents2Go editor and save it back to .docx.

NOTE:  Do not cut and paste too much into Ivona.  I found a paragraph is good.  There are two main drawbacks to loading text directly into Ivona: 1) Too much text takes time to process before it reads it back to you; 2) Every time you stop to edit, then resume, it jumps back to the beginning.

But if I want to hear what I have edited to date, I save to .pdf format, load it onto my Moon +reader Pro bookshelf and let Amy read the most spectacular novel ever written. Priceless.

As a product, I am impressed with the plethora of features of Moon + Pro.  I even downloaded a restaurant menu (PDF) and Amy read everything out loud to me, including the wine list—she’s not much of a drinker and she butchered the French wine names….   I think there is a way to correct pronunciation, but I have not explored that yet.

What you need to know about Moon + reader Pro on Android

The application is packed with features, but getting to those features without reading takes a bit of trial and error, with emphasis on thee error. As an example, I somehow dimed my screen setting within Moon + reader to where I could not see the screen.  I thought it was my tablet settings, but it only occurred when I opened a document within the Moon + reader.  I had to go on-line and learn that if you touch the middle of the document, it brings up the navigation bar.  I then had to go into a dark closet so I could see the screen.  Finding the setting to brighten the screen was buried, but I found the correction by swiping my finger up or down on the left side of the screen: brighten (up) dim (down).  You can also speed up or slow down the speech using finger touch sequences—you will want to learn them right at the start.

Adding files to your bookshelf and favorites is the next thing.  I suggest you do not conduct a search—way too many unrelated documents get loaded and you can only delete one document at a time.

Now that I have taken the time to understand the features of these two apps and how they work in concert with each other, I feel like I have gained sight.  It has helped me in my writing, significantly.  To hear your written words through the voice of someone else is your true editor.  Amy never criticizes my writing, only improves it.

I am using the free beta of Amy.  I think when the beta program ends, I can switch to another persona or outright buy one, but the price is steep ($125 – $250).  I have to admit, I fell in love with Jennifer, but can’t afford her.. just yet….

My writing platform (all links active below) 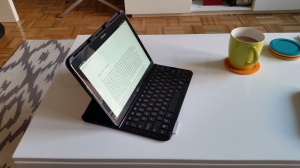 NOTES: I have written and published my novella, November Seed (87 pages), and the first draft of Silversides , my Work In Progress (489 pages), entirely on a Samsung Galaxy tab 10.1 and more recently upgraded to a Galaxy Pro Tab 12.2, using android 4.4.4. For compiling my work into .mobi and .ePUB, I use Scrivener’s on an iMac. All eBook cover art was taken on a Galaxy S3 & S5 Android smartphone and using either the onboard photo editing or SnapSeed app for android for finalizing.