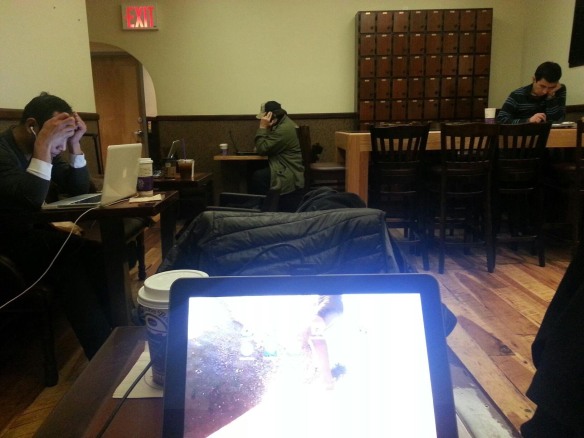 It is hard to believe that five years ago, on this date in a NYC coffee shop on the upper east side, I started my writing career. You can see other frustrated writers around me, but this cozy place became the catalyst for putting pen to paper, or in my case, fingers to keypad.  Since then, my debut novellas, November Seed & From Europa With Love, continue to have steady daily downloads on Amazon and the fan base, spread over eight countries, is still growing.   So thanks to all who support and push me onwards.

For the past few years I have been working on a full-length novel called Silversides which  takes place on Gliese 581 g.  As a new writer, I discovered why only the most seasoned writers leave the planet to tell a story and why most extraterrestrials come to Earth to kick our ass… because when you leave the planet you have to invent everything.   Along the way, I have written out weak characters and developed new ones, dragging along Kulcin who is the protagonist in, From Europa With Love.  Writing is a process of one step forward, two back but I have made some great plot changes with refined twists and developed a new ending the reader will not see coming.  Finally I can see the light at the end of the editing tunnel having received great feedback from Betabooks.co

I do not follow a linear path and have several other novels in the treatment stage that I am equally excited about, such as: HUM, Suicides Of Spring and Glycerine to name a few.  Recently, I have joined forces with a fellow writer (G+’er) to compile a list of shorts we have written and put out onto various sites, such as: Offworlders.com (my favorite), Wattpad (where one of my shorts made it into their premiere eZine, TEVUN KRUS).and other author/reader sites.  But it is G+ that has taught me to be a better writer because of the  invaluable advice and knowledge learned and shared by such super cool folks.